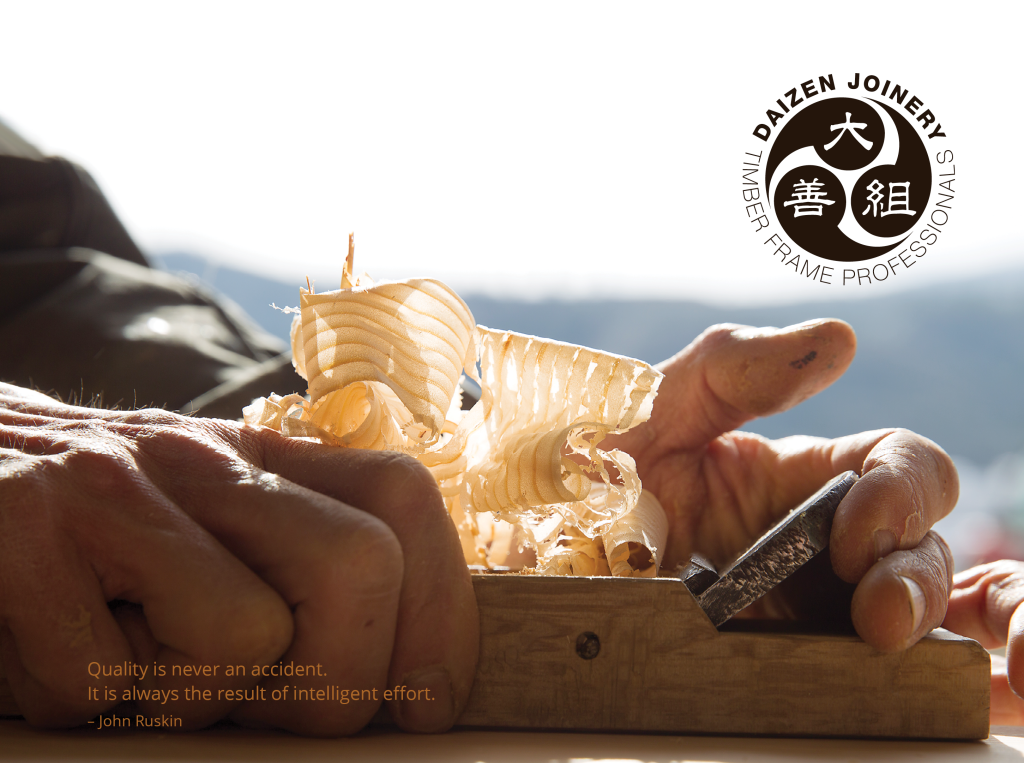 A new sharing venue, Pinterest, is a visual online pinboard to organize and share the things you love. Daizen now has two Pinterest boards—one for inspiring visual

inspirations (called Nice Work) and the other, Daizen Joinery, for  interesting accomplishments.

Update–as of June 6, Daizen now has nine pinboards!  The others include Stair, Garden/Exterior, Treehouse, Organic/Earth Building, Japanese Architecture, Places To Go, Fly Fishing, and a fledgling one for Methods.

You can “follow” either of these pinboards by clicking the red Request an Invite button. Or you can start your own Pinterest. It’s a feast for the eyes!

Timber at true square has a very sharp corner edge. For better safety in handling and in daily life, we take the edge off. There are also reports that fires start and catch more slowly with a chamfered edge compared to a square, sharp edge. And chamfering is a nice wood detail for emphasis, almost like the details on a Greek column.

This timber has no chamfer on it. You can see how sharp it is (and uncomfortable to bump against).

Here are the possibilities for chamfering. In any style, the size of the chamfer is always variable, based on customer preference. By default, we keep the size within a conservative range—a chamfer of about ¼ in.

Daizen offers two different edge profiles—45° and round. There are three styles for each edge profile:

This chamfer stops before the joint. This is the most typical style in timber framing because it frames the post and beam joint area nicely.

round edge enhanced joinery, with reveal.

This chamfer style exposes the joint more noticeably with a small reveal, and it still contains the ski stop finish.

round edge through chamfer.

This chamfer style could occur at any edge  (with a few exceptions like the bottom of the beam where a post would meet it, as for window and door openings).

At complex joinery points such as a scarf joint, we recommend chamfering the joinery edge to enhance the look of the joinery. If the joint is not chamfered, and we achieve a nice, tight fit, the joint becomes very flat (both less dramatic and less visible). A chamfer here gives depth at the joint that enhances the look of the wood joinery.

Imagine this hip rafter focal point without through chamfering.

Every building is a prototype. No two are alike.

In late April, the Timber framers Guild and the International Log Builders Association held a joint conference at the Asilomar conference center, on the Pacific Ocean just south of Monterey, an old YWCA camp designed largely by Arts and Crafts architect Julia Morgan and built with beautiful redwood timber.

There were lots of valuable seminars, too many to list here, but the keynote speaker—John Francis (the Planet Walker)—is well worth following on TED and  YouTube. He stopped using motorized vehicles for 22 years and stopped speaking for 17 years, as a protest statement following an oil spill He now shares his philosophy about the difference one person can make

We started using Sherpa fasteners in 2008, experimenting to determine their viability. Now, Sherpa is a must-have fastener in Daizen’s timber framing.

Many connections work with wood joinery, and we do not push ourselves to use Sherpa, but when we see a challenging situation (like a long spanned beam to receive a floor joist normally in a dovetail or simply a housing), we use Sherpa so as not to take any wood out of the main beam, thus keeping it at maximum strength. Dai asked Maik Gehlof, Sherpa’s manager of technical support, to explain the Sherpa to us.

Q.  Maik, can you give a brief history of Sherpa and describe how they are used in today’s market in Europe? I use it not only structurally, but also for stairs and railings.

A.  Hi Dai, Sherpa was born from the need for a connector that is easily installed and assembled.

In 2005, the Austrian company Harrer needed a connector solution that just wasn’t available, so they came up with their own: the first Sherpa. Made of steel, it worked just as well as their successors today made of cold-rolled aluminum. Steel had some drawbacks; it’s not only heavy, making the connector harder to handle, but it also rusts and is much harder to machine than aluminum. Optimizing the Sherpa connector started right at its birth and will continue on with every new generation.

Today’s European market is a very competitive one. Structures get larger, wackier, and more dependent on their connections, while having very tight budgets and timelines. The Sherpa connector is tailor-made for this.

Sherpa is a standardized system with a known set of parameters, so it’s easy and fast to design with them. As you mentioned, Dai, you are able to keep main beams at their full cross-section, so they can be smaller, saving resources and money. Since Sherpa connectors are pre-installed in the shop’s controlled environment and even the screws are labeled for easy verification, pre-manufacturing is fast and efficient, which Europeans are very keen on as it controls both cost and quality. Onsite, crane time is minimized, as there is no need to line up bolts or maneuver very heavy beams into place.

All told, you have a product that allows you to save money at several stages, but foremost it gives you a way to budget and schedule a project accurately. That is what the European competitive market is asking for and what the Sherpa connector is able to deliver.

The shape of the connector resembles the traditional dovetail, offering numerous advantages that Sherpa connectors borrow and improve on since there is no short grain to fail. This image shows the cuts along the long grain.

You are absolutely right, Dai, on the multitude of uses for the Sherpa connector. We have a dedicated series of connectors—the assembly series—designed for projects like stairs. And, of course, a Sherpa connector in the hands of a creative person can result in very interesting structures.

Below, an unusual use for Sherpa–table and benches.

A closer look at the connections and their curious symmetry.

To believe our work, you need to see it. We’ve just refined the Daizen project gallery on our website. More photos, interesting detail shots, supporting info, and easy browsing tell the stories of our projects. It’s fun to look through. Please be our guest!

What may be joined may be separated.

a Buddhist outlook on the transience of all phenomena, including human relations—and timbers, for re-use!

Things are in flux at Daizen, and you may be interested in these opportunities.

Daizen is looking for a distribution partner. We are a Shuswap- and Okanagan-based operation; for any area outside this region, we want to engage a partner to distribute our product. To discuss this, please reach Dai, [email protected], 250/679-2750. To learn more about Daizen Joinery, visit the Daizen website.

Our splined, curved-peak trellis display is for sale—we’ve used it for a year and are thinking of a new display design.

In progress: a curved dome

We’re in the process of erecting a dome for a sun room in a house. Daizen is one of the few sources in B.C. that produces grain-matched, bent, structural timber on a regular basis. To do this, we have developed an entire system, including our proprietary heavy duty clamps.

There is a huge difference between bending a curve and a cut-out curve. Curved beams that are bent retain their continuous fibre, which is what’s required to withstand a compression and tension load. But cut-out timbers simply cut a shape out from a larger timber. This approach is not only limited in size; it can also disconnect most of the fibres entirely, eliminating its usefulness as structural timber. Also, a cut-out curve may split, especially if it is not cut out from free-of-heart-center (FOHC) timber, again limiting the size potential.

A curved beam truss, or a dome as in these pictures, is a structural member, feasible only by bending. In a setting of mostly right angles and straight lines, bent structural timber is not only functional—it’s also refreshing in its roundness.